Sky Portrait Artist of the Week

One of the best things about lockdown has been taking part in online events that you wouldn’t normally get a chance to do, artistically speaking. One of these is Portrait Artist of the Week, streamed from Sky’s Artist of the Year Facebook page.

It’s Sky’s ‘Portrait Artist of the Year’ concept opened up and made available for everyone to join in during May. I’ve loved it.  I am usually pretty churlish about PAOTY, because I don’t get to join in, and it’s not that I begrudge the contestants who get to have a go but I really want to do it too. I also moan about competitive art with some justification because I feel art should be your means of expression that’s personal to you rather then a competition. But surprisingly for me the experience ot 2000 artists getting to paint the same sitter, albeit virtually and share the results has been a delight. 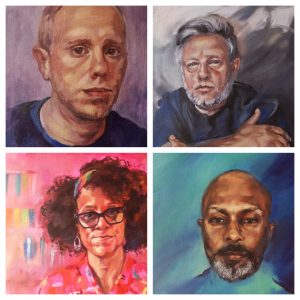 Originally the programme was set to run for four weeks, but that’s just been extended for a further four.
These are my first four portraits.

I started with Akram Khan. I’d left my canvas prep to the last minute and ended up priming a spare canvas with acrylic paint instead of oil. The surface felt nice to work on but the effect was a bit too bright really, although I’d wanted a bright colour as he’s a dancer. Also, I tried to paint Akram from ‘life’ alongside the demonstrating artist (previous winner Christabel Blackburn) and didn’t realise that the programme cuts between artist, (fidgety) sitter, and the presenters and judges. I had a pose in mind, which Akram held briefly at the beginning before moving to Christabel’s preferred direct face-on pose. I should have screenshotted earlier! The chat between them was very interesting, with each asking questions about the other’s art form and working practices. I tried to incorporate some movement into the background with swirling blue colours, as Akram is a dancer. Kate Bryan commented on my Instagram pic that it had good rhythm! 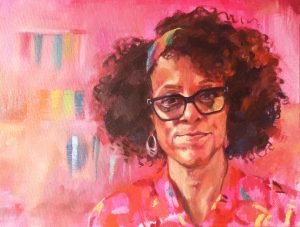 I read up a little bit about Bernardine before starting painting and felt she seemed a vibrant, creative sort of person so I went for a super bright turpsy wash of quinacridone red on a canvas the night before. It was kind of lucky, as it toned in really well with the pink blouse she was wearing, though it was such a strong base I needed to dial all the colours up to the max. Duncan Shoosmith, the demonstrating artist, has such a wonderful strong structural style that it was a pleasure to see him work and the chat between he and Bernardine was a great insight into both their work and influences. Bernardine shared lots about her Booker prize winning novel ‘Girl, Woman, Other’, which I’ve been tempted into buying!
The backdrop for the portrait was a wonderful set of shelves, full of art and books. I started to paint them in but I knew I wouldn’t have time to do them justice (as I like to stick to the time limit) so I wiped the books I had painted back a bit and I decided to keep it as I liked the hazy background effect of kaleidoscopic colour it gave.

I am happy to say that Sky Arts featured this painting on week 3 of PAOTW. 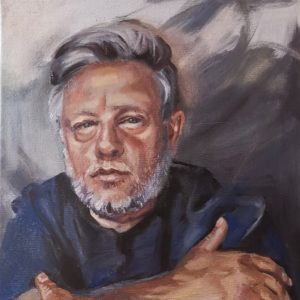 Rankin is a photographer and a truly talented and creative man, who was fascinating to listen to. He was a bit of a challenge to paint however. I decided to leave the decision about background until the morning as doing my research the night before didn’t yield any ideas for colour. I loved the moving photos he’s done, and would have loved to incorporate movement into my painitn, especially as he’s so fidgety, but I think it was a risk too far on the day.

I still enjoyed making the portrait, it was quite big so I left it a bit loose for the sense of movement as well as for the time constraint.

Samira Addo, the previous PAOTY winner and demonstrating artist, produced a wonderful, abstract, painting full of movement and in his favourite colours of black and blue. 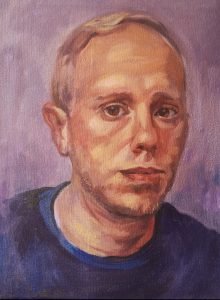 I thought this week was going to be the final session so although super tired I set up for the painting, not really knowing what I was going to do. I was cheered up by the brilliant sparky chat from the sitter, with his early morning champagne and cheeky flirting with wonderful artist Gareth Reid. Gareth, working in charcoal went back to his teaching roots and gave great explanations and tips as he worked.
I went a bit smaller than for previous portraits (16″ x 20″) which took the pressure off a bit, even though my painted Robert had three chin transplants. I kind of wish I’d been able to go bigger and include his beautiful dog Rocco, but I still enjoyed it and was pleased with the result, even if I spent the rest of the afternoon flat out on the sofa.

So onwards to next week…another four in fact…I can’t wait to find out who’s sitting!

Have I helped you?

If my blog posts or tutorials have helped you, why not put a few coins in my virtual tip jar? Thanks!