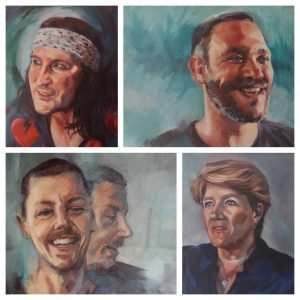 Originally the programme was set to run for four weeks  (here is my blog post about the first four weeks), but it was extended for a further four.
These are my second four portraits. 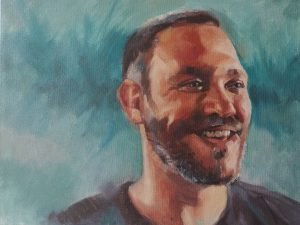 I have learnt to screenshot frantically at the beginning of the live stream, hoping to catch a pose that captured an aspect of the sitter (from my point of view) as I haven’t always wanted to paint the same view as the featured previous series winning artist. I was really happy to have caught Will laughing, he’s full of humour, but I feel he has a love-hate relationship with being portrayed by the media and I wanted the composition to be a little uneasy. In fact this is somewhat similar to the layout I was going to use for Akram Khan, except I would have liked a side on view of him looking out of the painting with the swirly patterns behind him.

I enjoyed Will’s chat with Christian Hook, what a fascinating man, and a phenomenal artist, a force of nature! I loved hearing about how Christian works and what interests him; at the moment Chi energy and life force. Interestingly he rarely paints portraits any more as he feels limited by the constraints of getting a likeness. I agreed with Will that it was great to hear Christian say how he sometimes makes mistakes on purpose to see how his work develops, as the unexpected stops work becoming stale. 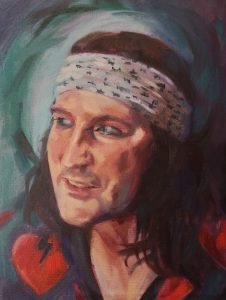 Noel is the sitter I’ve been most familiar with so far and I know he is an artist so I did have a good look at his Instagram before starting to familiarise myself with his paintings. I knew they were expressionist and imagainative, but I wanted to look for colour themes for clues. As it turned out he had two paintings behind him so I was able to draw on them slightly. I loved the energetic mark-making of the recent abstract piece he showed so thought I’d try to put some into the background. My gut instinct had been a purple background and the black and red shirt he was wearing looked good on this – I decided to pull out the green colour from his abstract as well, though not sure whether this made it a bit busy.

What was absolutely fascinating was the talk between artist Kimberly Klauss and Noel. It was great to have a sitter who is an artist and was able to ask Kimberly insightful questions and give lots of his own experience. Often people talk about art or to artists with a reverence that isn’t really merited, there is much more to a portrait than ‘capturing someone’s soul’, as Noel said, that’s not even a thing. It was very interesting to me to hear about process, material, experimenting, and particularly issues around confidence and identity which loom large for most artists. 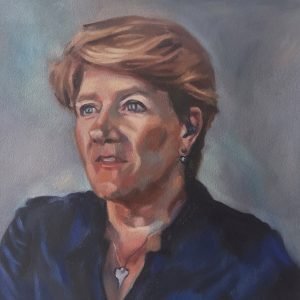 Week seven, and a female sitter again, Clare Balding. Clare is a consummate professional as an interviewer, so her interaction with demonstrating watercolour artist Aine Devine was very illuminating, almost painting a portrait of the artist herself. Aine is a bold and fearless watercolourist, and a fantastic teacher, but is very honest and open as an artist about how she works and about her vulnerabilities. The best parts to watch were as she tried to loosen up the painting, turning it round, throwing paint at it, moving like a dancer as she injected it with motion and colour.
Clare and Aine had a very interesting conversation where they discussed the similarities between sport and painting. Aine said that there were points in the painting where, for example, the act of throwing the paint could lose the painting or make it – an all or nothing risk – which Clare compared to the batting of Ben Stokes at the end of the England World Cup match against New Zealand.

I opted to play it a bit safe today and paint Clare in oil on paper, that I’ve been using a lot recently. I wanted to keep this portrait quite classic and simple. Clare moves about a lot and is very animated and interested in everything, I tried to capture her looking as if she was thinking and about ask a question. 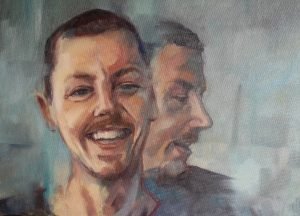 This isn’t really finished, but I needed to try out the idea of the double portrait and as it was the week for Tom Mead to demonstrate it seemed appropriate. Tom Mead paints fractured images of multiple portrait views broken up by paint marks that he calls ‘glitches’. He says it comes from his love of film, and it definitely tells a story about the sitter as well as suggesting movement. Suggesting movement is something I’ve been interested in for a while.

I went back to oil on canvas this week and I’m not entirely happy with how it came out, but working to a tight deadline anyway it’s always tricky to get a double portrait in, and the complexity really demanded a prep sketch or three. I haven’t done my homework this week and I felt it. The photo of my painting is particularly bad though, and there are aspects of it I like, not least the fact that painting like this makes you deviate from the screenshot or photo and concentrate on the work itself, just painting for painting’s sake.

My aim was to capture Professor Green’s humour and gregarious character, but also the more inward looking side that makes him an active advocate for men’s mental health, and a documentary maker on some serious and thought-provoking subjects.

And the good news is, there is another week! So we paint on!

Have I helped you?

If my blog posts or tutorials have helped you, why not put a few coins in my virtual tip jar? Thanks!